Office of the Deputy Mayor for Public Safety and Justice

Christopher Geldart
Deputy Mayor for Public Safety and Justice
-A +A 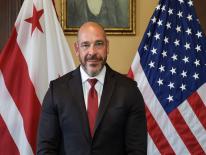 Mayor Muriel Bowser appointed Christopher Geldart to serve as Deputy Mayor for Public Safety and Justice on January 28, 2021 after having previously served as the District’s Operational Lead during the emergency response to COVID-19 and Director of the Department of Public Works.

Mr. Geldart is a recognized leader in emergency management, whose in-depth experience spans municipal, state and federal agencies, as well as the private sector. He is proficient in coordinating local government agency resources, regional authorities, public utilities and the private sector to achieve successful solutions during emergency situations.

As former Director of the DC Homeland Security and Emergency Management Agency from 2012-2017, Mr. Geldart led the planning and execution of three presidentially declared disasters and 20 national special security events, including three inaugurations and State of the Union Addresses. During his tenure with HSEMA, he also directed the response to two major snowstorms as well as Hurricane Sandy.

On the federal government level, Mr. Geldart served as the Federal Emergency Management Agency’s Director of the National Capital Region Coordination Office. In this capacity, he was the federal government’s lead for domestic preparedness in the National Capital Region. He furthered the region’s efforts in risk management, federal participation in regional planning with state and local partners, and catastrophic planning throughout the greater National Capital Region. Before joining FEMA in April 2007, Mr. Geldart worked for the State of Maryland as Assistant Director of the Governor’s Office of Homeland Security. He also served in the United States Marine Corps from 1989 to 2001, where he had several leadership positions in the Fleet Marine Force and was certified as an instructor in a joint military formal school environment.

Mr. Geldart earned a bachelor’s degree in American History from the University of Maryland.